The Fishing Hut is a small building located near the beach. It offers the Fisherman job.

The Fishing Hut has a baby blue exterior, a dark brown roof, and a white trim. Various cardboard boxes can be seen inside and outside of the building. There is a dark grey anchor hanging near the entrance as a decoration.

Inside, there are multiple fishing rods of various colours leaning on the wall. A Fisherman occupies this building, and the player can talk to him.

"Where can I do some fishing?"

"Arr! Just grab a fishing rod to your right and go down to the water mate."

"You've been a fisherman for long?"

"Yarr! I've been finshing in these waters for longer than you've been alive mate."

"You betcha mate! I've caught quite a few large fishes in my years." 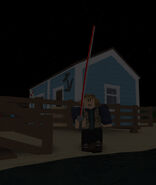 An employee during a shift of their fishing job.