Were you looking for Delivery Person?

Pizza Baker is one of the two jobs available at Pizza Planet. Players can make pizzas in this job and serve it to NPC customers using the Delivery Person job.

As a pizza baker at Pizza Planet, the player's job is to cook specific pizzas.

The kitchen is located at the back of the Pizza Planet. In here are four different workstations, from which the player can see the requested pizza on a tablet to their right. The player will then create the pizza for it to be pushed out onto a conveyor that leads to the oven. There are also various crates on either side that are to be used to refill the work station's ingredients when they run out of ingredients.

When the player interacts with the station pictured on the right, they can place dough. From here, they will be given a GUI that lets them add sauce, then cheese, and then finally toppings. There are three toppings: vegetables, pepperoni, and ham. The player must make the pizza specified on the pad, or else an error noise will play, the pad will have a red X, and the player must wait several seconds before the next order. If they succeed and make the correct pizza, a jingle will play, and the pad will clear out for a few seconds before showing the next pizza. The pizza will automatically go on a conveyor and go into an oven.

Once enough pizzas have been cooked, the station will appear empty, and the pad will now say "You're out of ingredients! Take a crate to restock" and display an ingredient crate. Crates are on the far left and right of the kitchen. When the player interacts with one, they will pick it up. The crate will disappear for a moment, then reappear in a few moments. The player can interact with an empty or full workstation to refill it.

The player is capable of working at multiple stations at once. 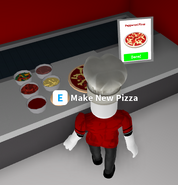 An employee during a shift as a Pizza Baker

A thumbnail of two characters as Pizza Bakers 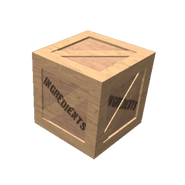 A crate of ingredients 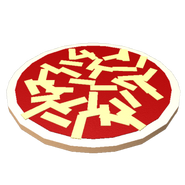 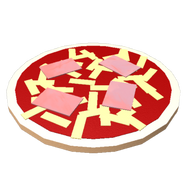 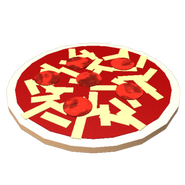 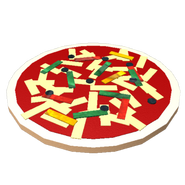