The Miner job in Welcome to Bloxburg was a job introduced in the update v0.7.1. This job is located at The Bloxburg Cave, which is inside the Mountain. while, Inside the cave, you will see some colored barrels and also some rocks lying around for decoration.

The player will be given a pickaxe and a uniform while a loading screen is over them teleporting them to the jobs location to work the job at for and then they will be in the mine. To start Working you have to Mine, the player must select a block and select the option 'Mine' to start mining it. The player will then automatically use the pickaxe to hit the block several times until it disappears. Each swing of the pickaxe takes 1 second. After the block has been mined, the player will receive some money and EXP according to how much rarity the block has depends on how much they'll recieve for the two things.

The player cannot mine the bordering walls and bedrock of the quarry.

Players can also mine TNT blocks. Once mined, a TNT block will hiss for a few seconds before exploding and destroying all blocks within its current radius in the area. It will also kill the player if they are within 2 blocks of the TNT when it explodes. TNT can be used to the player's advantage as it can easily destroy an entire section, allowing the player to dig deeper. Blocks destroyed by TNT still count towards the player's shift earnings.

Once the player mines down low enough, they will hit the bedrock layer bottom and the only way they can get out is to either find a way out by mining blocks and making a stair set out of them (which could take a very long time) or they can, press End Shift and it will teleport you back to the top.

There are six types of blocks that can be mined. 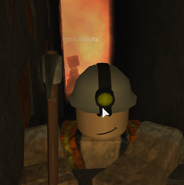 A miner caught in an explosion. 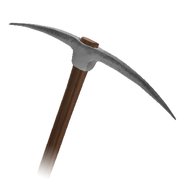 The pickaxe icon.
Community content is available under CC-BY-SA unless otherwise noted.
Advertisement