Did you mean: House, House Bills, or Household?

The owner of a plot can manage permissions by using the "Manage Permissions" bar in "My House", or they can interact with players and use the menu.

Players with this permission can only knock on doors and ring doorbells. They do not have much access to the house, but sometimes they can find ways to glitch inside. This permission is automatically set for everybody, as this is considered a neutral permission.

Guests can open doors and interact with items, such as sitting on a couch or playing games on a computer. They cannot see the contents of a fridge or store food in a fridge. Guests can take food items, snack items, or flowers from display cases as well. Guests cannot open doors that are locked for guests by the owner, and they cannot build on plots. Guests cannot change pictures (decals) in houses either.

This is the only permission where you have unique settings to lock various doors and prevent guests from using certain items.

Currently, roommates have an additional ability to edit a plot in Build Mode, given a set budget by the owner only if "Roommate Building" is enabled in Settings. Roommates cannot sell items. Roommates, however, has the ability to change pictures in the owner's house, move objects and place items from the owner's inventory.

In previous updates, roommates had the absolute highest permission you could ever get. They can use vehicles, open/use doors, see contents of a fridge, and store food in a fridge. By disabling roommate building in the settings menu they have the same permissions as guest but can access all doors whether they are locked or unlocked by the owner.

The roommate permission is considered a neutral between a "Guest" and "Co-Owner". You can say that you can use this permission with a trusted guest.

Co-Owner has almost every permission the plot owner has, with the exception of being unable to pay house bills, change the house's name (file name), kick other players out, change plot permissions, and bulldoze. They can build on plots with a set budget given by the owner and can also sell items in Build Mode, and they cannot build Blockbux items. This is currently the highest permission a single player can give. Be careful if you give a person this permission, though; other players can delete one's house and the player will have to make a new house.

Players who are blocked cannot access the owner's plot, and a 'force field' alike to the one in build mode will surround their plot. This will prevent them from walking on your plot, as well as interacting with any nearby facilities. However, players can still view the plot. This is to provide protection for the player.

This force field is also used in Build Mode.

The Blocked position is considered the lowest permission a player can give.

Unlike other roles, family can be with another role. At the "set permissions & family" part of house management, there are + next to other people's names and a "family permission" (from none to co-owner).

Whenever you add someone to a family, they can accept or deny, if they accept you will both have each other's family permissions for both people's houses. Other than that, there is no other family usage other than roleplaying. (More family usage might be added soon) 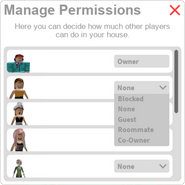