Welcome to Bloxburg Wiki
Register
Don't have an account?
Sign In
Advertisement
in: Locations, House, Game Functions,
and 2 more

Did you mean: House Bills, House Permissions, or Household?

The House is an important residential building where a player lives in Welcome to Bloxburg. All of the houses in Bloxburg (besides the prebuilt ones the player can choose from when they start a new game) are, in fact, created by the players themselves. The size of a house plot is 30x30 (900 units), while the size of a house plot with the Large Plot gamepass is 50x50 (2500 units).

Welcome to Bloxburg's house building system allows players to place walls, furniture, vehicles, windows, and more on the player's plot so that the player can make their own unique and original home. Many players choose to use their plots not just for houses, but for building restaurants, hotels, farms, small towns, villages and more thanks to the detailed customization system. This system is similar to the popular Sims video game series.

The plot owner can set house permissions for people they want to block or allow access into their house.

Plot data is the amount of space players have used on a plot. An empty plot has 0% plot data. Before update 0.10.1, players could only use up to 100% plot data; if they wanted to continue to add items after they reached this point, they had to remove other items on the plot. As of update 0.10.1, upon reaching 100% plot data, players are given the option to purchase an extra 20% plot data for 59 robux.

Every few game days, the player must pay house bills. If the player fails to pay house bills on time, their electricity and water will be shut off, disabling the player from using anything of that nature until their bills are paid. Your bills price depends on the value of your home.

Note that the bills do not stack, and are not required to be paid, but one won't be able to use water and electricity.

The player can also choose to pay their house bills automatically by going to Options in the Main Menu and choosing "Automatically Pay Bills: Off/On".

Six pre-built houses are also available in the menu upon either joining the game for the first time after wiping a player's data (removed, as of 0.6.9), or purchasing a new house slot for B$300.

The Empty Plot is, as the name suggests, just an empty plot besides a mailbox and some trash bag.

The 2016 Happy Home of Robloxia is the old Bloxburg starter home. Not much is known about this house as not many players were documenting Bloxburg in its early years. This house includes a small living room with an old TV and bookshelf, a red bedroom with another bookshelf and side table, and a blue kitchen with a table, and a bathroom. This house contains 1 bedroom and 1 bathroom.

The Happy Home of Robloxia is the starter home players can get for free. If one would like to buy another one though, it will cost $7,500. The Happy Home of Robloxia contains a charming outside, as well as a cute inside that, holds a small kitchen, basic living area and a bedroom with a dresser, bed, closet, as well as a small bathroom for hygiene.

The Classic Family Home is a large, mini-mansion style home containing a large bedroom and living room, as well as a spacious kitchen with granite countertops and a large garage for vehicles.

The Small Suburban is the second most expensive pre-built house in the game, having two bedrooms, a kitchen, and a fenced in outside. It is based on suburban houses in the U.S. and Canada.

This house is the largest and most expensive pre-built house in the game. Being the only prebuilt house to have an outer wall, it boasts an amazing amount of rooms. Although it's expensive, it is partially a letdown, as the house value itself costs $138,000. It's modeled after villas, which you would most likely find in Spain, Italy, or even in California. Keep in mind that it only has one bedroom and no ceiling lights despite being an expensive mansion. 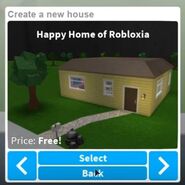 Player about to buy a house.

The sign that appears on an empty House plot 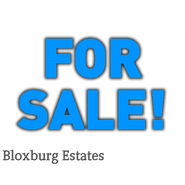 "Change Name" pop-up for when an invalid name is inputted 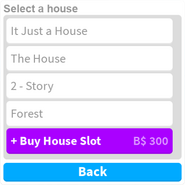 Error for when the game is unable to select a plot

A house that has been edited

The button to buy a new house plot.