Gamepasses are special features that are bought with Robux and give players special advantages while playing Welcome to Bloxburg, such as extra money while working, building more than one level and more. These gamepasses prices ranges from R$100 to R$400.

This section displays a summary of all the gamepasses that players can purchase in Welcome to Bloxburg.

The Store - where players can buy gamepasses ingame. 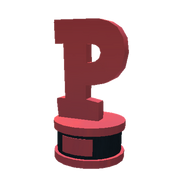 The Premium Trophy awarded by the Premium gamepass.

Purchased gamepasses in the store.