At The Fishing Hut, nearby the Ferris Wheel, the player can become a fisherman and be given a fishing rod to cast at the shoreline. Once equipped, the player can cast it, but it won't do anything unless it makes it into the water. In due time, the bobber will sink into the water, and the player will then reel in the line to catch a fish, which promptly disappears, and gives them money. After casting a rod, it takes 5–20 seconds until the bobber dips, going in groups of 5 (5, 10, 15 and 20 seconds).

However, if the player reels in the line before a fish bites or if it's too late, nothing will happen, and the player gets no money from it.

The Fishing Hut uniform consists of:

A fisherman reeling in a fish. 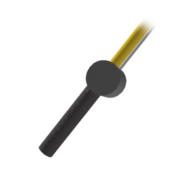