Customers are NPCs that appear near specific places of work (e.g. Bloxburg Fresh Food). They follow a set of instructions which are unique to each location that customers appear in, customers from the same location will have the same set of instructions to perform. Most will require player activity at some point while following these instructions in order to continue further with them, they will wait idly until this requirement is met. Customers serve as an element for players to interact with or receive a directive from, both of which aid the player in the completion of their job's objective (if customers are included within the job process).

Customers will only appear at or near specific locations, they will return to this location at the end of their list of instructions and then despawn upon reaching it. The only deviation from the previous conditions is seen in the customers spawned for the delivery person job: one such customer will generate at one of several predefined points in Bloxburg at random, if that point is not currently occupied (opposed to in/near one single location), and will only do so when the player picks up a pizza box. They will only despawn once the player no longer possesses aforesaid pizza box and multiple customers cannot spawn in the same place.

It is currently unknown whether there would be an exception for the prohibition of customers spawning in the same location on behalf of the delivery person job in the case of exceeding the number of points the map has for these customers to spawn. This would be possible in an instance such as a neighbourhood wherein it is possible for the owner to increase the player count over what would be usual in order to surpass the spawn point capacity.

Customers generate with a shirt, pants and either a hat or hair, an accessory may be given but is not guaranteed - all of the items are randomly assigned. The items they are spawned with may be derived from a small list of defined items as reoccurring items may be seen in high frequency and there is not a large variance in such items. 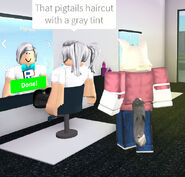 A customer at Stylez Hair Studio

Customers Spawning Next To Pizza Planet