Welcome to Bloxburg Wiki
Register
Don't have an account?
Sign In
Advertisement
in: Locations, Jobs, Job Locations,
and 3 more

Bloxburg Fresh Food is a grocery store in the city of Bloxburg. It was added into the game in update 0.3.5. Players can purchase food and work two different jobs at this location, which are the Stocker and Cashier job. The Cashier job requires players to scan items and place them in bags, while the Stocker job requires players to fill empty shelves with box crates in the stockroom. Nearby locations include Bloxburg Gym, Stylez Hair Studio and Bloxburg City Hall.

Bloxburg Fresh Food is a large building that is mostly light gray. On the walls are posters advertising apples, Bloxiade, canned beans and watermelons, all of which can be found and purchased in the store. Just above that, a green line is portrayed. The center also bulks out a bit. On the top of the center, a sign in dark gray with large green text "BFF" is on the top of the sign, while on the bottom there is a green box that says "Supermarket" in white.

There are two locked garage doors by the Green Clean building, with a small set or stairs to get up to. The garage doors lead to the supply room.

Inside the building, there is a load of shopping carts, 4 cashier workplaces, and a few bag crates. Posters with advertisements as the same of the outside posters (apples, Bloxiade, canned beans and watermelons), and the same Green/White theme seen outside. There is a small room that only serves as a purpose so that the player can work as a stocker. 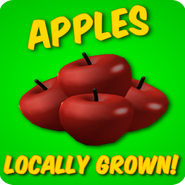 The poster for locally grown Apples. 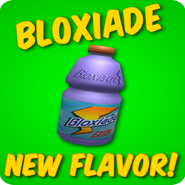 The poster for a new flavor of Bloxiade. 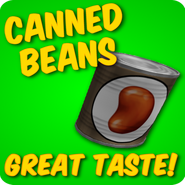 The poster for Canned Beans. 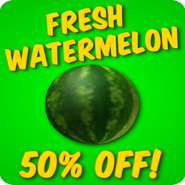 The poster for 50% off sale of Watermelon. 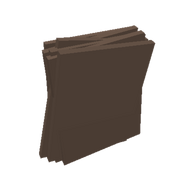 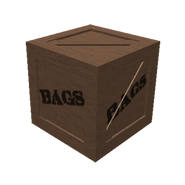 A crate of bags.

An employee working at the grocery store. 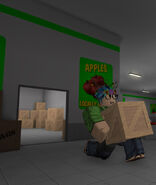 An employee running out of the stock-room during a stocker shift.

A cashier which is starving works. 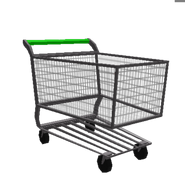