Aesthetics for the city.
Bloxburg City Hall is an aesthetic building in the city of Bloxburg. Currently, the building serves no gameplay purpose, but, it gives the town of Bloxburg a rather ravishing appearance. It is located at the centre of the city, and the nearby locations being Bloxburg Gym, Beat Nightclub and Bloxburg Fresh Food.

The Bloxburg City Hall is a work in progress.

The City hall is a mostly a red brick building with glass windows. A gray plaque with black text "Bloxburg City Hall" is located on the top of the exterior at the front. Gray pillars are present on the front, and behind them is the front door, which is currently the only door that you can go through.

The inside of the Bloxburg City Hall is a large foyer lined with bookshelves and tall glass doors that some cannot be opened. On the 2 sides, There is a Library where you can find bookshelves and Some seating. The foyer also has a pair of stairs both at different sides leading up into a balcony with more bookshelves. The future plans for City Hall are not yet known by the media, but fans all across the world have their own opinions. 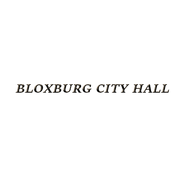