Welcome to Bloxburg Wiki
Register
Don't have an account?
Sign In
Advertisement
in: Locations, Non Jobs-Locations, Jobs,
and 2 more

Bloxburg is a fictional city that serves as the primary location in the popular Roblox game, 'Welcome to Bloxburg'.

The whole city is surrounded by a rock border and splits at the river that flows into a larger body of water. Rough Trees are found scattered across the map. The two ends of the border are currently located by the Beach.

Bloxburg has several buildings, most of them are located at the center. Other buildings can be found by the Beach, Mountain, or alongside the Highway. The outskirts of the city are separated into two areas, Bloxy Acres and Riverside Estates. These two areas are where the houses built by players can be found. 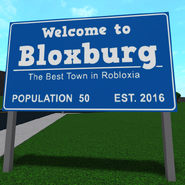 One of two signs found on the outskirts of Bloxburg

A thumbnail with Bloxburg as the background